I haven't posted here in a while.  I've mostly been putting things on Instagram. Lazy I know!  This season Susky Theatre is doing Shakespeare's A Midsummer Night's Dream.  It's going to be set in Victorian England around 1910. Our hapless humans, Hermia, Helena, Demetrius, Mechanicals and Lysander will be lost in a garden hedge maze and tortured by Puck and other mischievous fairies.

Stay tuned!  In the meantime here is a link to my Instagram if you want to take a look at what I've been doing (and not posting here.)  Sorry!

Today I'm sharing this inexpensive and effective way I'm organizing my fabric stash.  I have lots of fabric in lots of containers and when I want to use something I usually empty out the entire box to see what I have and then put it all back (or sometimes I don't and the clutter takes on a life of its own!) 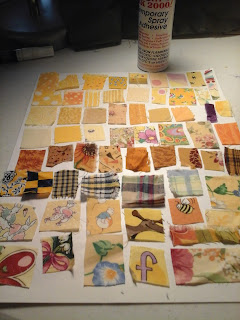 So here's what I did:

I cut a one inch or so snippet of every fabric in the container.  Then I sprayed a piece of 8 1/2 x 11 card stock with spray adhesive and stuck them all on.

You could also use glue or tape but I liked the spray adhesive because it's tacky. I could peel pieces off and move them around if needed.

*UPDATE* The spray glue does Not stay sticky over time. I've had to go back and re-glue my swatches to the cardstock. Just use Elmer's or other, stronger glue that'll hold up or you'll get this: 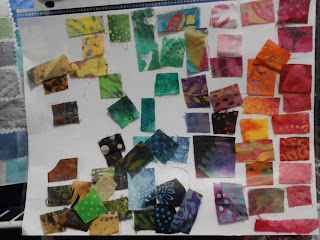 Once I had all of my snippets on the card I slid it into a plastic notebook sleeve and attached it to my container.

Now I can see what I have at a glance. 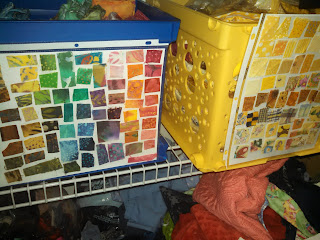 Notice the jumbled mess underneath?  I admit I thought about cropping that out. Do you ever see someone's super tidy work space or fully completed organizational project and imagine that they totally have their act together and got it all done in one day? Well, I am definitely not one of those people! I'm just going to work on it a little bit at a time in between other projects. I plan on doing a couple of boxes a week until it's done.
Posted by Periwinkle Paisley at 4:56 PM No comments:

If everybody's off being an engineer, who's going to do my highlights?

Lately all around the internet I’ve been seeing memes that look like this: 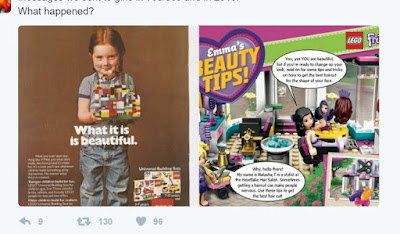 On the right we have a little girl with a ‘look at what I made!’ grin proudly displaying her creation.  On the left we have a pre-designed Lego beauty salon.  Shown side by side a Twitter user asks, “What happened?”  Meaning when did toy marketing become so sexist? (I agree, what is up with that?)

But this is a comparison of apples to oranges.   Pre-designed sets tend to limit imagination regardless of their target market.  You follow the directions, build the thing to make it look like the box cover and it’s done.

By comparison, a big tub of loose Legos has infinite possibilities, becoming anything your imagination can dream up!  But this isn’t what was meant by the comparison of the little girl building her own cool thing vs. the beauty shop set.


What is implied is that the Lego Salon promotes negative stereotypes for girls because dialogue of these dolls focuses on physical appearances.

Isn’t this just another example of how girls are taught to prioritize attractiveness over intelligence?

Look AGAIN at what’s being said in those word bubbles. Look at the scene.  Go ahead, I’ll wait.

Natasha, the Lego lady on the left, is holding scissors.  She’s giving her professional opinion and reassuring a nervous customer.  She tells us her job title.  Natasha’s there to work.  The doll sitting in the chair looks like a customer but she’s also offering advice about choosing a hairstyle.  I did a little Googling and found out her name is Emma, as in the “Emma’s Beauty Tips” headline up in the corner.  She too is there to work.  It’s not just another superficial ‘sit still and look pretty’ trope.

The field of cosmetology is dominated by women, and judging by the bill at my last visit to the salon, it’s a valid career choice.  Being a stylist requires professional certification or a two year Associate’s Degree. Successful hair stylists have a skill set of above average interpersonal skills, manual dexterity, creativity and (like engineering) an ability for three dimensional thinking. It’s true you probably won’t be pulling a six figure salary like an investment banker, but you can definitely support yourself and eventually open your own salon.

YOU CAN BE ANYTHING YOU WANT TO BE!!

We’ve been empowering girls with this message since the early 80s.  But somewhere along the way, we stopped asking, “What do you want to be?”  Ages ago math and science were considered ‘too hard’ for girls, much better suited to boys.  That was and is complete BS.  But in our efforts to ensure that young girls aren’t being dissuaded from STEM careers, have we forgotten to keep asking, “What do you like to do?”

We hear over and over that women can do the same jobs as men and that we should earn as much as men.  (Yeah we should!)  I think what’s not being heard enough though is that traditionally female jobs are equally worthwhile if those are the interests that our daughters wish to pursue.
Posted by Periwinkle Paisley at 7:25 PM No comments:

Periwinkle Paisley
I am a wife, mom of three, costumer and artist

If you Pin, Blog, Tweet or show my work in other places on the web, credit me and link back. I put my heart into my art, don't steal it. Thanks!

Search My Blog (I might've said something cool!)